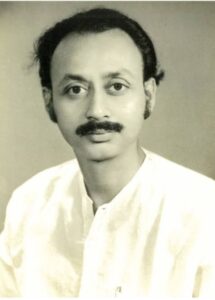 Tribute to the Living Legend of Indian Poetry in English 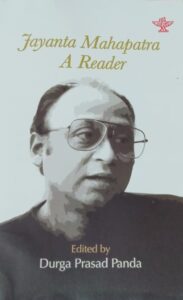 JAYANTA MAHAPATRA is in his nineties now. It was during the dawn of the 21st century, in 2001, that I first met the smiling blue-jeans clad poet from Cuttack Odisha. In fact, as Head, Dept of English, Calcutta University, I realized that I  could in the next two years, chase certain dream targets such as organizing seminars and conferences, inviting some of the iconic figures of Indian English literature.  One of the first invitees was poet Jayanta Mahapatra. I was surprised and overwhelmed by his warmth, simplicity, smiling face and his readiness to talk to all his admiring readers. I had booked his accommodation at the Ramakrishna Mission International Guest House, at Golpark in South Kolkata . He arrived around 3 pm in the afternoon, the day before the conference. As soon as I met him, I learnt from him that since the lunch hour was over, he would have to wait till the dinner time, for having some food. So, my first job was to find some food for my invitee poet who was virtually starving. Unfortunately, the Golpark area in South Kolkata in 2001, did not have many restaurants and cafes as there are now. Both of us walked into the Sutripti restaurant, the only one which seemed would be able to toss up a late lunch for my revered invitee. Poet Mahapatra, a small eater, relished the chicken sandwiches and coffee and also the fresh lime soda. As we were chatting, the outstanding Nigerian footballer Chima Okorie, who scored 131 goals for East Bengal,walked up to us. Chima Okorie was fascinated by Jayanta Mahapatra’s way of speaking English. Chima remarked that he had sensed Jayanta Mahapatra was surely an acclaimed personality. He felt attracted to poet Mahapatra because he had rarely heard a man who had such a mellifluous, flute-like voice. The poet in the blue jeans who was perhaps in his late seventies in fact looked more youthful than the renowned footballer. This has been one of the lasting impressions of Jayanta Mahapatra who spoke in our conference and read his poems with such captivating charm, that the participants followed him around as long as he was there in the Calcutta University College Street campus. 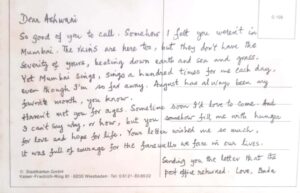 Indisputably, Jayanta da is the most luminous and mesmerizing poet of the primal joy of mythic adventures of self and sensuality (sacred or secular). Known as wandering yaksha in Indian poetry , he is epic, even in miniature, concealed in the frighteningly intimate mysteries of life. The universal human imagination through meandering rhythm of rainclouds reveals, regales itself in his verses as the renewal of our humanity with a rage and regret.  It is impossible to think of Indian poetry without him. With transgressive thrills and mischievous provocations, he has quietly and delightfully invented a uniquely personal language specific to his poetry and people. What is striking about his poetic resonance or dhvani is the exceptional intensity of rasa or aesthetic enjoyment of rupture and rapture etched in our memory like ‘the mating songs of peacock and kingfisher’. Unlike ‘unhomely’ and culturally uprooted baroque Anglophone poetry, Jayanta Mahapatra’s fluorescent and flamboyant verses are deeply ‘rooted’ in his native world – his fabled Tinkonia Bagicha home, the ancient abode of rains, rivers, and rites.  No wonder, when he speaks ‘all the voices of history begin to speak all at once’, and suddenly Arctic snow starts melting in the hills of Niyamgiri! I tell you truthfully. Every time, I receive a letter from Jayanta da in his lyric calligraphic prose. I am frightened. Even before I have opened the envelope, my identity has been metamorphosed; I suddenly become a silkworm devouring its own marrows- dying to born again. This strangely unsettling yet thrilling celebration of changing forms of life defines Jayanta da and his poetic art! 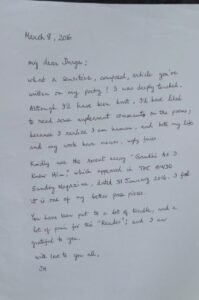 [I]mages, stark and meditative, loom over his literary terrain – though they appear bizarre and abstract on the surface yet symbolize some inner reality churned out from the dark depths of some invisible, hidden wound. Perhaps, this aspect of Jayanta’s poetry distinguishes him from the rest of his compatriots; his audacity to go and see beyond what is ‘given’ and to explore the ‘unseen’ with an intensely penetrating eye. Angst, agony, isolation, violence, poverty, suffering, helplessness, absurdity and his failure to escape from such grotesque vicissitudes of life provide the necessary condition, impetus and ground for his muse to flourish. And the much vaunted ‘illusiveness’ and ‘obscurity’ in his poetry is due to a ceaseless tussle between the ‘abstract’ and ‘concrete’ running into each other complementing, converging, confronting and colliding with each other much the same way as is evident in the realm of quantum physics. It would not be wrong to say that in a number of ways, Jayanta seems very much like his own poems – meditative, morose and always anxious of dark possibilities… This celebration of pain in his poems doesn’t necessarily mean that ‘pleasure’ did not exist in his life at all. Rather, in the rugged terrain of his imagination it always exists ‘elsewhere’, somewhere beyond his poetic realm; maybe in the act of ‘writing’ itself. 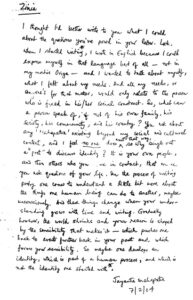 After my co-ordination of a Bhashanagar translation workshop in Bhubaneswar with poet Subodh Sarkar, neither of us wanted to miss the opportunity to meet Jayanta Mahapatra. By way of NH 16, Cuttack was only 26.3 kilometres away. We dialed the poet’s number and were greeted by a warm and courteous voice. Jayanta Mahapatra’s house in Tinkonia Bagicha is like his poems. It has nothing extravagant about it, but all the comforts of a home. There were numerous books on the shelves, a black-and-white framed photograph of Runu Mahapatra (she was beautiful), an exclusive working table diligently maintained. First, we drank tea, and later, coconut water. We talked about poetry and periodicals. The discussion took an interesting turn. The two poets were long acquainted and caught up on many things. Jayanta Mahapatra was very enthusiastic about our translations. Mahapatra is a well-known translator and has translated several poets including Shakti Chattopadhay’s  Jete Pari Kintu Keno Jabo, which I later reviewed. We could not stay for lunch because we had our return flights the same day. When I finally said goodbye to the poet whose poems were the axes of my thesis, he gave me a large box of packed Chhena Poda- special sweets of Orissa. “To Darjeeling  from Orissa.” He said. I was touched by his geniality. A reader goes back to her favourite poets for different emotional and cerebral needs at different curves of her life. When I go back to Jayanta Mahapatra, what I love most today, is the stillness that is at the heart of his poems, like a stone thrown into a pond creates circles and then settles down. I had felt a similar stillness in Tinkonia Bagicha. The poet is a flâneur, himself always a little removed from the events, watching and taking snapshots of life from various angles. Most of his poems are attentive engagements to his immediate environment,  to the inner movements of his mind. He attends to fleeting inner feelings that arise in him as a reaction to past or present incidents, records them and lets them pass, like a vipasana mediation before the mind goes into Samadhi. His poem “The Wave” perhaps best sums up this process:

Feel each particle of the mind

How it rises to an attitude

Before sliding down its own lift

Back where the old trembling was …

(Close the Sky, Ten by Ten)

My proximity to the poet has left me enriched manifold.

No furies of glacial debris

No cyclonic storms. Nothing to fear here.

I remember sitting in the shade of Tamal trees

Looking into the dark doe- eyed small rivers, my hands

Ah, we made love again, and again, whispering softly

In the dew-drenched migratory waters.

They spring from village wells,

Sometimes, they originate from the wet clay floors of

They hop over a few villages, disappear and

Suddenly re-appear along the

Shades of monsoon trail through the moist forest.

Tempted by the fragrance of lotus seeds on their

Soothe their parched skin in the fluvial innocence of

If there is anything missing in our house

We leap into the transparent pools in the river,

Scrap the sand-dunes in the river bed and discover

Old spectacles, and water-pipes of our grand parents.

Illuminating rough and bumpy pavements of the village.

They knock my doors in raag Maulkauns

And I wake up in the morning like a wild flower

Blooming in the scent of my childhood.

It is no secret that I am frightened of mighty ancient rivers.

Peace is a warm shawl

Within the sunless darkness

Of the serene womb

The first flash of light

The first touch of hands

The snipping of the cord

Peace is as fragile as a snowflake

On a smiling leaf sunning itself

Peace lies at the heart of every outcry

Peace is stabbed each time

As the knife enters the heart

Peace is in splinters

As the bombs drop, guns fire

All is toxic everywhere

Landscapes are pregnant with landmines

The skies are darkened by the wings of vultures

Is an invincible passionate warrior

That nestles at the core of being

On the charred wastelands

Of Kurukshetra and Troy

Peace that truly surpasses all understanding

Death of A Poet

Exactly in the middle

A poet could ask for

Coming to a sreeching halt

Before the question mark.

A man does not mean anything

Sitting on the riverbank throwing pebbles

Into the muddy current,

A man becomes the place. (Jayanta Mahapatra: Somewhere My Man)

When the petrichor wanted to narrate the earth tale to me

I did not pay heed

told me that it would rain.

I danced in the rain

unwrapping myself slowly to the unreachable indigo sky

I did not harken the tale of the earth, young that I was

the river flowed in trochee inside my body.

When I crossed the spear grass fields

which sing of the breathing winds

I was light- footed. The spikelets whispered

the earth tale but I was

obsessed with the blue rising hills

where sunlight played in light and shade

during daytime and houses came alive one by one at night.

I paid no heed to the spikelets and let them dry

that was right after the meditating cranes flew off

and told me that many others, like me, would cross the fields .

Now, it is winter in my bones. My blood does not pulsate

in mad rhythm in my veins with the movements

of the moon. I am at home

with the iambic of

“My heart ached and a drowsy numbness … ”

Now it is time to listen to

the tale the earth had tried to convey.

To listen to the personal story of the great matriarch

one has to make a room

in the ruins of silence underneath the earth.

I carry my shovel and spade on my stooping shoulders

and walk towards the horizon

where the sun is setting slowly.