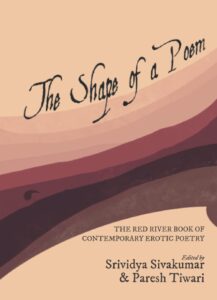 It’s a weekday in the month of July in the second year of the plague.  A book has just arrived at my doorstep via a masked delivery man, followed by a text message (“Thank you for cooperating in the contactless delivery of your shpt….”). I sanitise the parcel thoroughly, then hold the book in my hands like a rare artefact. There is a certain je ne saisquoi about the smooth cover page that draws me in. Pastel shades- nudes graduating into pink, pink into mauve, mauve into maroon, maroon into a velvety darkness that engulfs everything. I keep staring. I am now thinking of lipsticks.There is a little black comma somewhere, swimming close to the womb of language, hinting at the nature of creation, a sigh, an enigma, the pause between finish and unfinish. It takes me to a certain Ocean Vuong poem titled “The Gift”:

She doesn’t know what comes after.

So we begin again:

But I can see the fourth letter:

A strand of black hair- unraveled

&written on her cheek.

And so begins the actual reading. In a little over two hours, I manage to consume the book from cover to cover. We begin with geometry (“This chin is a diagonal/ fishing through your square mouth”- Aakriti Kuntal), end with geology (“Me the fertile soil. You, the drenching rain”). In between, linguistics, philosophy, biology and all other disciplines dance to the all-consuming fire of cosmic creation. The poems themselves are never crass, never vulgar, but often like diffused soft light in a moment of clarity.

There is a beauty with which all the different elements in the book come together: How it all meshes together- the cover, the line drawings,the language, the images- until it’s a complete organic whole and you cannot take anything apart without disrupting this unity.

Here’s a little tête-à-tête with the editors of the book, Dr. Srividya Sivakumar and Mr. Paresh Tiwari.

Srividya: Thank you so much, Nikita.

One of the most rewarding experiences for me when I come across words I know to be deeply truthful – happens with everyone, I guess, you know it your bones and yet have failed to articulate or even acknowledge it. Reading the 450-odd works submitted to us, time and again brought me this feeling. It was a trip alright, in every sense of the word.

From the point of view of the craft, what was the criteria behind choosing the poems? For instance, was the focus on the familiarity of metaphors, or the non-familiarity, the newness of language?

Srividya: We actually discussed this before we embarked on The Shape of a Poem. Paresh’s prior experience as an editor has been invaluable to me, personally. Sorting poems, creating reference documents, cross-references and so on was a time-consuming, albeit essential activity. (My Shape of a Poem folder on the laptop has 49 documents from the process, not to mention the countless emails and texts)

There is that visceral response to a poem, isn’t it? The way it makes us feel; whether we sit there with our jaw to the floor, amazed at what we’ve just read, or shake our head in utter disgust or disbelief, or just close our eyes, as though reluctant to let the magic leave us. That intuitive response was a good guide for the book as well.

Of course there is comfort in familiarity, familiar themes, and that is precisely why we debated a great deal on choosing a wide variety of themes, and poems pertaining to that. To an extent where we had to take the painful decision of letting go of some lovely poems that spoke of similar themes as others.

I must also add here that our one criterion was that we had to choose those poems on which we both agreed! So, there were those we both loved from the get-go which were relatively easy to select. We then presented our case- with extensive notes- for those poems that one of us liked but the other hadn’t. And then decided on a final list.

Paresh: As far as craft goes, I believe Srividya and have taken different paths to arrive at similar destinations. I started my journey into the lush green world of poetry through the most sparse of the forms – haiku, I migrated to haibun and tanka soon after and then mostly to prose poetry. This journey has awakened me to the joy of the unexpected, a turn of phrase, an unconventional pairing of images and words, even surrealism. I like it when things don’t make sense until they do with an ‘Aha’. In fact the philosophy of haikai is steeped deeply in this ‘aha’ moment.

I was fortunate to have Srividya as my co-editor, our conversations over the years were instrumental in how we went about choosing the poems for this anthology; it was mostly instinctive and organic. As Srividya has already mentioned, there were works that we didn’t see quite in the same way. Those were in fact the most enriching works for us as editors and lifelong students of poetry.We had to dig in deep, question our own understanding of the poem – its art and craft included – before making our case, and then of course the ensuing discussions, often over long mails or voice messages that we both cherished and learned immensely from.

We received poems that we classified as problematic. For example, there was one that objectified a woman’s body, reducing her to body parts. One more spoke about a scenario where the lover refuses, only to be ‘coaxed’ by the man, into agreement. Poems where certain terrible terminology was used to speak of the act- we did not want them in the anthology.

The body is a political, social statement. It can speak of privilege and struggle, it can speak of freedom and liberation, shackles and taboos. It is important to move away from the air-dusted, super filtered notion of what kind of bodies can enjoy and act upon desire.

Paresh: The erotic has been and continues to be taboo. Even before we made our intent public, we knew that at least from some quarters, we will receive a passive or even aggressive pushback. From a suppressed giggle, a raised eyebrow, to downright disbelief, to unfettered enthusiasm and support, I have seen a range of responses to this anthology. I believe it stems from our deep-rooted insecurity with our bodies. The idea of an ‘ideal’ body has been so skewed lately that it is an act of courage even to look into the mirror without flinching. Then of course, the issues of gender sensitivity, place of consent, the validity of treating the sensual as essential and more.

Have we managed to make a dent, however small in the armour of these ironclad beliefs, prejudices, and preconceptions? I believe so. But the test of time is the one that matters.Though I must add that buying and displaying The Shape in your bookshelf can be an act of courage and defiance as well.

Lastly, there are two poems from the anthology that I cannot stop thinking about. The first one is the one-lined haiku by Kala Ramesh, especially the double colon she employs, and the palpable sense of pause it evokes:

in each cell :: your touch still breathing

The second one is the first half of Black Oestrus by Arundhati Subramaniam, because of the way she put something into words that I have maybe felt but never knew could be put into words so perfectly.

Do you have any favourite pieces or images from the collection that come to you at odd, unassuming times?

Srividya: This is an easy one for me, and not the easy way out. I had goose bumps the first time I read the piece by Paresh that became a part of the book. It is lyrical, unusual and beautifully ties into The Shape of a Poem. It is a beloved facet of the anthology, for me, better known as Confession by the Editors.

Paresh: As it is said, a parent shouldn’t play favourites. And yet who will we be if not imperfect? I won’t go into the why, instead allowing our readers to interpret these lines the way they wish to, but here are few of my favourites –

Because of the way he chose a peach —

because of the way his eyes closed

with that first mouthed bite;

because he didn’t wipe juice

from lips, from chin —

this is why I chose him,

From Peach Stone by Carole MacRury

That hard nugget of pain, I would suck it,

seed of pomegranate. I would lift it

carry a small one in the private

cave of the mouth.

From Basket of Figs by Ellen Bass

It is raining a small rain

A gentle rain over all the world

To sustain or to receive or to reciprocate

Because men are greedy: they bite and tear

From Scent of Love  by Hoshang Merchant