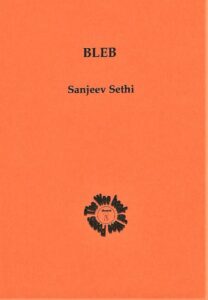 On a page, the shadow of solitude is sharpening a memory with a knife.  A distant sky is gargling directives somewhere, which the silhouetted contour tries to understand (in vain). Experiences such as these are prismed through the lens of individual lived experiences, then translated into a language that is at once personal, and brilliantly crisp. On another page, the obtruder is seen reminiscing over a father figure with an emotion that is very non-associative with nostalgia in popular canvas. The unusual usage of lesser-known words is something of a signature style of Mr. Sanjeev Sethi, and a very conscious one at that. In between this play of restrained emotional expression in a playfully personal language, the spiritual space- feelers from divinity– envelops him when in emotional turmoil. A locked gaze with a fern tree is brought into linguistic consciousness and inked onto paper. A search for purpose curiously compares poets to moons. Somewhere in this scenario, a meta subtract opens: the mind transforms into a bicycle track, words speed about as cyclists, ideas tease “with a tumescent dash”, all consciously engaged in the birth of the first draft of a poem. The poet then calls for a nurse for still-borns. (It’s interesting that the book opens with the process of creation that leads to the birth of a rejected draft, a literary stillborn).  In another poem, while discussing the need for staying true to the emotion of grief while writing about said grief, Mr. Sethi superbly pens, “every deletion has its erasure dust”. The poems that are heavily-laden with these meta-elements are some of the most interesting ones for this reviewer. Somewhere in one of the pages, a two-hander is staged in the domestic space with an emotion so delicate, it melts away the hardness of the reader’s physical realities for a nanosecond. The curtains close. The sharpening is complete. The sawdust is vaccumed away. The moment, chiselled and sharpened with finesse, is ready to be offered to the world. This book must be read to understand what excellence in extreme brevity looks like, with each poem being the wholesome flesh of a ripe emotion, a philosophy, a fleeting moment one wishes to hold or let go.

Here’s a little conversation with Mr. Sethi on his books, craft, process, and more.

Congratulations Sanjeev ji! With Bleb and Hesitancies already out, and Wrappings in Bespoke on the verge of release, it’s an exciting year for you, and we at EKL Review are thrilled for you! Could you please take us through the points of difference between the books?

Thank you, Nikita. It has been a packed season. I will have to mention the chronology of events to 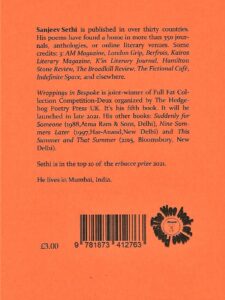 answer this. Wrappings in Bespoke was meant to be my fourth book of poems. In fact, it was to be launched on January 21, 2021. This is by The Hedgehog Poetry Press UK. I am a joint winner of the Full Fat Collection Competition-Deux in November 2019. As the prize, they publish a book and gift the author 100 copies. There was a postponement as Covid hit the UK rather badly. I didn’t allow this to affect me in any way and went on with the daily business of inditing and publishing through the slush pile.

Bleb is published by Hybriddreich in Scotland. They have a series called The Wee Book of Wee Poems. In the last year or so, I have been intermittently published by Hybriddreich in various anthologies, chapbooks, and in their flagship magazine Dreich, so there is a certain comfort, and of course, mutual respect with Jack Caradoc, the dynamic editor. When I received an email somewhere towards the end of April 2021 from him asking me to send a manuscript for their Wee Book series, I jumped at the offer and put it on hold whatever else I was scheduled to do to string together 31 poems that spoke the most to me then. The basic premise is that the poems had to be a maximum of ten lines, excluding the title.

Bleb was launched on June 30, 2021. A week before its release, I received an offer with an advance royalty from Bitan Chakraborty and Kiriti Sengupta of CLASSIX, an imprint of Hawakal. I happily agreed and started putting across poems for Hesitancies. As anyone who the House of Hawakal has published knows; celerity is their middle name. Hesitancies was launched on July 28, 2021.

Now coming to the crux of your question, Wrappings in Bespoke was finalized sometime in October 2019, Bleb in May 2021, and Hesitancies in July 2021. For me, the poems in either of the books mirror my mind space while winnowing them. Bleb is easy to understand as there is a line limitation. So between the finalizing of the manuscript of Wrapping in Bespoke and Hesitancies, there is a twenty-month gap.

I have a huge body of published poems worldwide, all I do is let the selected poems flow steadily, so there is no jerk for the informed reader. A poetry book has a certain rhythm, a curve. I work to get the correct meter.  To find  the differences is the brief of literary critics.

Brilliant! What catches me off-guard about your poems is the razor-sharp focus on the kernel: that one specific, delicate emotion/moment in time. Am I correct in saying that with you, there often is no peeling to reach the core; the core is the piece?

Only a literary critic like yourself can say it so beautifully. I go on with the business of writing a poem in the best possible manner; I’m capable of. Through the lived experience as a poet, I have equipped myself with certain aesthetics of laying bare a concern, and I work towards fructifying it. Sometimes I succeed. The rest no will ever know but my dustbin. Or to employ a more current idiom, the deleted times section of my computer (Laughs).

Thank you, you’re very kind (smiles). Interesting. Let’s talk about your process for a bit. The I in your poems has a very clear distance from the hand that’s typing the poem on a laptop. It almost appears to me that the writer-persona is assuming the role of a window or a flower vase, observing this self-persona from a distance go about life and emotions, and then engaging in the act of writing. Can you talk about this distance, this outsider-looking-in POV, this meditative approach to your writing?

This is an astute observation. For me, poetry is my way of unraveling the challenges experience hurls at us. As someone who indites every day, minutiae is the raw material from which my poems are born. When the process overtakes me as a reflex, I distance myself from the situation as though I’m writing about another being. I think this is done to distill and to get clarity to my craft.

That’s very well put. I am curious, how different is a first draft from a final draft at this stage in your career? I am asking because as young writers, we experience the writing impulse, and then the impulse to refine/sharpen. Has the process of refining become so second nature to you by this point in your life and career that the two have merged? Does that ever happen to a writer?

Some poems require no redacting, others need to be pruned. That takes time. But for me, this is effortless. I think if you love it as much as I do, then the labor doesn’t seem taxing. I can keep working on a poem for hours and some for weeks or months without it irking me. This is the miracle of creation. The metrics isn’t time-based. The question I ask myself is: am I satisfied? I can’t speak of other writers, but this hasn’t happened to me.

The metrics isn’t time-based indeed. This has been a pleasure. Thank you so much, Sanjeev ji. 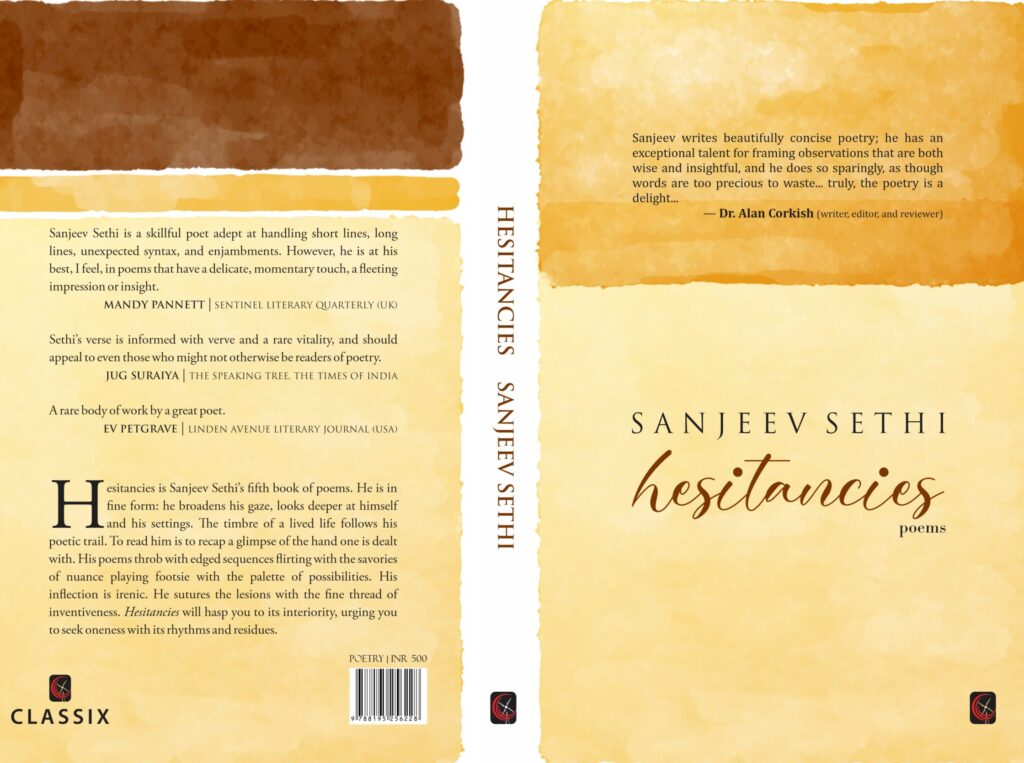