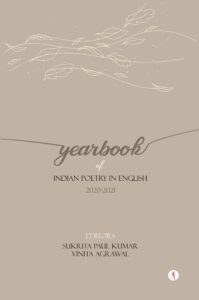 Congratulations on the amazing job you did for the Yearbook! What, in your opinion, does Indian poetry in English offer readers in post-colonial India?

Sukrita & Vinita: Indian poetry in English in post-colonial India offers a wide-angle perspective to Indian society as it has evolved post-independence. While you still have poems addressing age old issues of divide namely caste, religion, economic disparities etc., contemporary English poetry brings under its arch myriad modern concerns as well. Issues like alienation, identity, belonging, gender, LGBTQ, to name a few. The themes that poetry addresses are not new but the craft certainly is more avant-garde, the outlook wider, more global. Consider for instance, the vast body of the Indian diaspora that writes about finding a foothold and acceptance in a foreign land and looks at its own country with a sense of nostalgia and yearning. Consider in another instance Dalit poetry in India – their poetry is a powerful medium for the community to make its mark in mainstream society. Look at the vast canon we have in gender literature today in India. It’s an awe-inspiring ode to the struggles that women in our country have undergone. To sum up, it would not be an exaggeration to say that Indian poetry in English is a significant benchmark to measure the evolution of our society itself.

What does the Yearbook say to historians of literature, or cultural theorists of today?

S & V: We can only answer this question as Editors of the Yearbook. The historians of literature and cultural theorists may draw their own inferences from the Yearbook but as far as we are concerned, the anthology is a sincere attempt to archive quality poetry being written by Indians living in India or overseas in a given year. And because it is a selection of carefully sifted work, it is fairly representative of the manner in which the Indian pen is moving. The Yearbook reflects the subjects simmering in the minds of our poets. Take for example the current pandemic- the book has several poems on the experiences of the migrant labour, the intense solitude which the lockdown imposed on the individual and on ecological concerns as well – all being different facets of the pandemic.

So the Yearbook offers a sweeping yet pointed look at how English poetry is evolving in India. If a critic would like to assess our poetry scene, the Yearbook would be a good place to begin. It would be up to him or her to judge its strength and weaknesses and predict future trends but we have certainly provided a platform from where such an assessment might be made.

Was there a certain stylistic approach that you found in a lot of the poems? What did you discover about language in editing the volume?

S & V: As we went through the poems, we realized that there was a large variety of stylistic devices used by the poets. What was obvious were the following: the use of small sections within a poem, use of space in different ways, a poem in couplets on the one hand while on the other poems with stanzas of varied lengths, poems in meaningful shapes and sizes, prose poems, narrative poems and also lyrical ones. One prominent feature noticed is that most poets use punctuation rather sparsely and there is an uninhibited use of ellipses and dashes, allowing thus, some lines to linger in the mind of the reader; they are suggestive in their non-conclusive meaning.

The rather free inclusion of some untranslatable words from different Indian languages is indicative of the Indian poet’s liberation from the erstwhile mandatory use of ‘Queen’s English’, a colonial legacy. Words such as shramik, aangan, pagari, ghutan fit well in their contexts despite the vocabulary not being English. The same can be said of the imagery which is generally local and indigenous, so native to the experience of the poem. Each poem locates its own idiom which is what gives it the ring of authenticity. The cultural context gets reflected with its own face! The Indian poets in English have battled against linguistic  pretensions to find their own voice. The Yearbook bears evidence for this fact.

What differentiates Indian Poetry in English from English Literature generally?

S & V: In very general terms, since Indian Poetry in English is grounded in its own soil, and is breathing in its own cultural ambience, it is bound to find its own mode of expression in its distinct voice. No longer does it lie under the baggage of the colonial hangover which needed to be shed along with the dominant shadow of English Literature looming over it perpetually. A greater engagement with the literary traditions from within the Indian domain, and indeed a direct confrontation with life as it is led here have enriched the literary expression of the Indian poets writing in English. From small issues to the larger ones, Indian poetry today is very inclusive and diverse; it may be noted that even though contemporary English literature may have canonical poetic voices, it doesn’t have as evocative and emphatic a cultural diversity. That is evident both in form as well as content.

FROM THE PUBLISHER’S VANTAGE POINT

Congratulations on the massive success of the Yearbook of Indian Poetry in English (2020-2021). Tell me, why did the Yearbook project appeal to you? What reputation did you hope it would bring Hawakal?

Bitan Chakraborty: The Yearbook of Indian Poetry in English (2020-2021) isn’t all about the quality of work. The collection houses myriad voices. The anthology isn’t merely about the forms employed in crafting poetry. This volume employs poetry to discuss various subjects: love, protest, feminism, oppression, philosophy, and others. From well-known poets (like Keki N. Daruwalla, Jayanta Mahapatra, Adil Jussawalla, Ranjit Hoskote, Sanjeev Sethi, etc.) to emerging talents (like Kunjana Parashar, Jhilam Chattaraj, Suhit Kelkar, etc.), the Yearbook exhibits a plethora of verse-makers. As a publisher what else would have been more appealing than this project?

If we accept the presence of Indian English in world literature, we have to admit that in India, one can speak and write in the English language in several ways. These expressions are predominantly influenced by demography. India, with its abundant cultural backgrounds, has many versions of the same language (English). And to publish a volume of Indian English poetry is a necessary work for us.