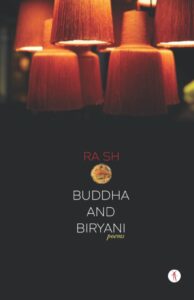 Rash’s (Ravi Shanker N) collection of poems, “Buddha and Biryani” is nearly on everything, witnessed through the singular lens of poetry. The collection is a tempting allurement to find the universe through the eyes of the poet and one sights them as extraordinarily good. The poems are fearlessly raw. Beginning with Silent Farewells, that which has boomed to be a book ( this one poem has been translated into many languages and also into different dialects in Malayalam) where the poet establishes that, in life one by no means looks back and farewells are not as pitiful as one presumes but they are ethereal agreements to melodies that the ones who go away can detect. Survival kit, can be visualized as a continuation of Silent Farewells, at what place, the poet assists us by saying, “You can return to the place you left not the place that left you (17).” The City of the Blind, comes forth from an uncommonly brilliant perspective, that cause an impatience in the reader as to how one could communicate the concept of “blindness” and “sight” to the blind when he says:

In the city of the blind

you don’t find what you find

unless they are placed there

The many and different impressions of mother that spread out in numerous poems equates motherhood with courage, these poems are profound and poignant, as in Umbilical Ache:

You nourished me through

this nonexistent tube for

with memories and fables

In Buddha and Biryani, we find a Buddha on, “a long foodie trip” in “gastronomic fervor” to all parts of the globe, the poem doused in irony ends in epiphany:

in the cycle of life and death

there is no right food

The cannibals know that best. (30)

Rash is a love poet at heart and soul, one who has delved into man-woman relationship from all attainable dimensions. Many a time, his love poems take us to celestial footings where the rest of the existence appears immaterial and empty, as in, While We Wait for the Other:

While we wait for the other

the sea evaporates shore to shore.

In his love poems, love comes to pass for the most uncanny of reasons, like the adolescent who is fascinated by his chemistry teacher’s way of articulating, “E-t-h-y-l”, and the reader is assisted to think of people who does commonplace things in the most exceptional manner when the poet says,

It is lovely where such images hit me at heart

Where, in what form, shall we meet again?

Love as a hot cup of tea looking for its beloved’s sip is another unusual image:

My tea loves her

and dies for her

The river-sea image that recur in the poems present the insatiable thirst of life, at the same instant, it is the perpetual restlessness that thrusts the self, looking for the unreachable.

To reason out, these are poems opposed to your expectations, what a title you consider would guide you to, takes you to the otherwise, a contrary perspective on life, making the collection a delightful read. It is not what one says but it is how one says that makes the creative writer singular. Rash says all that you know but in an exceptionally different manner and that makes Buddha and Biryani an outstanding collection of poems. Taking up the words of K. Satchidanandan to conclude, “Gods, ghosts, ghouls, black magicians and mythological characters parade these poems with ease as they are shorn of their loads of men’s faith in them, and even sex turns into a tantalizing, even cannibalistic ritual.”