A Review of “in the mirror, our graves” 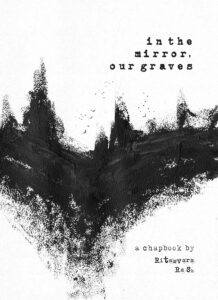 The chapbook “in the mirror, our graves” by N. Ravi Shanker (Ra Sh) and Ritamvara Bhattacharya is a bold and innovative step in Indian English poetry. I consider it as a logical culmination of sorts of three ‘kindles’ that came out before this, Wine-Kissed Poems by Dr. Koshy AV and Jagari Mukherjee, Vodka by the Volga by Dr. Santosh Bakaya and Dr. Koshy AV, and From Prinsep Ghat to Peer Panjal by Gopal Lahiri and Dr. Santosh Bakaya, in adapting to modern demands to have books affordable as well as in keeping them short while not compromising in quality. The difference is that by moving into chapbook form this has, arguably, perhaps, more appeal and in using the dialogue form also used in Wine-Kissed Poems in a different way in hiding the identities of who is writing what, adding a layer of mystery regarding both gender and roles in love. A chapbook is a popular form for poetry in the West and finally these poets are bringing it here as is the kindle (e-chapbook), with the above-mentioned qualities.

The book costs only 50 Rupees, hundred with postage, and is self-published as most of the best poetry books on earth were, thus in a highly laudable ‘great tradition’, and a pleasure to see, to hold, to feel and to read. It is not just poetry but an art object. The cover by Ritamvara Bhattacharya is a delight as it can be of faces, a landscape that is both natural beauty or charred earth, spread legs, male genitalia hinted at, faces that are both fetching and macabre peering out at you from the tangled land or hair and a spread on to the back cover so you have to hold it open to see it fully. It is a kind of Rorshchach ink blot. The use of thread is nostalgic and a lovely touch to sew the pages together. Both the paper chosen for the cover and the printing of the poems are worth it, and the splashes and smudges and slight touches in them of leaves etc., also add to the texture of the collection’s beauty. Devnarayan Prasad and Anand Ayinikatt are to be specially mentioned as being the architects of these designs that really become a part of the book’s poetry as much as the poems themselves in their presence, including two genderless faces, two fingerprints, the two leaves, the two wings, twice, the flowers, the ants, the four-leaf clover, the branches (maybe), the slashes, the blots, the letters of the alphabet and the unevenness of the numbers used especially the zero(es) that may be the O with its many connotations or the shunya etc. The former has done the design of the book and the latter, the touches inside.

On the back as a blurb, Dona Mayoora says of the book “The poetic exchanges…travel through us like a shaft of light.” Nothing could be a more apt description of reading the dialogue, on us readers, or at least on me.

The book opens with a memorable quote by Rumi: “Lovers don’t finally meet somewhere. They’re in each other all along.” This sets the stage for the fact that we don’t know who is writing what in each poem or which poem is written by whom as lovers are one.

The poems are set out in pairs and there are twenty of them and the poets show remarkable restraint in limiting them to short outbursts of powerful lyricism so they can nestle side by side on each page as lovers do in the same bed. They are “a tale of separation between three centuries,” and ” A series of poems exchanged between two poets who have never met and are separated by vast expanses of time and space. Love is fluid matter,” they say, “that runs through them without crystallization.”

The poems follow a pattern of being written many years apart, suggesting the song of love remains the same whoever writes it or the Hindu myth of rebirth and afterlife and previous lives as they span the past, present, and future. The first pair is written in 1975 and replied to in 1985 and the second and third come again ten years apart but the third set slips into the future, the reply coming in 2025, Having got us used to this shuttling in time the collection also gets us used to shuttling forwards and backwards through centuries ( 19th, 20th, 21st) as promised and to the idea that a reply may come even after twenty years or thirty or as in one case seventy-five years or in another in the same year, 2020, perhaps on the same day, September 11, 2020 , at 10 PM. The poems also shuttle between places and spaces and cultures. However “time is inconsequential” as a poem purportedly written in 1885 may have in it references to 1111, or 2123 CE or 630 BC and to the exact time of writing perhaps, 10 PM, and the month and date and year.

While I loved all the poems in it some poems, as with all readers, spoke more to me, in it, than others. I read it at one go, on my terrace, and immediately set out on this review as I felt it worth reviewing instantly. The first two poems and the last two are, of course, important as it leads from “no mirrors” in the first one to “in the mirror, two graves” in the last and are placed there strategically by the poets but the poem I spoke of which is 1885 CE and two others really hit me, being visceral, in the gut. Please note that I have not bothered at all to make out who wrote what, this is just my gut reaction. I have played the game as the poets wanted me to play it, and if in a poem there is a she addressed or a dress of a woman described I don’t take it as a clue that the former is by Ra Sh and the latter is by Ritamvara. 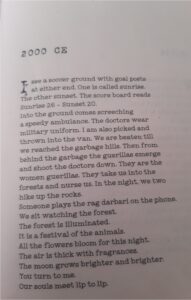 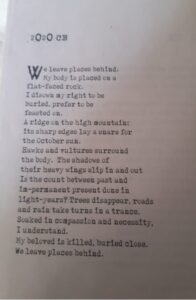 It is fitting that the poems I like most come at the end of the book. This is a sign that this is not only a beautiful collection but knows what it is doing in building things to a crescendo.

There are echoes here to Plath and Eliot and the collection deals not only with memory and remembrance in dealing with the past but with the reality of the present and with imagination and fancy in dealing with the future. I want to briefly dwell on Lacan and Freud who figure in this collection obviously due to the sexuality, eroticism, and sensory as well as sensual nature of the poems, but in the last poem in contradiction or contradistinction to Lacan’s idea that the self is formed by seeing its own image in a mirror (metaphorically too) is this beautiful line” “You were my image.” The graves bring in Freud and the drive to Thanatos, that all relationships too die, and yet reflect Saul and Jonathan who were not separated in death. Though in the past tense it suggests a way, traditional and perhaps lost in the postmodern and post-truth world that the schism in everything symbolized by the self and other, the crack which does not let in the light, to misquote Rumi, can be healed by love and poetry, temporarily as in this powerful book of poetry and permanently or eternally if one could only find such a lover as the two lovers in these poems are shown to be, infinite in the capacity for and ability to love one another.

The book has many powerful poems and lines and stanzas in it and is worth reading and rereading.

If the hints in the poems are any clue this was a collection written during the Covid pandemic and lockdown and as such it has another layer of value for readers as it also shows poetry and love as a way to survive in today’s present dilemma.

This collection on the whole came to me as a welcome zephyr and refreshing change from the usual poetry I am exposed to in the world of Indian English poetry. Kudos to two powerful poets who make each poem in it have a punch and sing in this collection.

* The review was first published in Fasihi magazine.